We are proud to offer the following Dragunov rifles:

This is a the nicest Russian Tiger SVD we have ever had. Rifle is in amazing condition and definitely appears to be unfired. Accessories are as mint as I have seen. This is one that went into a safe 30 years ago and just came out. Great example of the Russian SVD rifles, and really great investments. 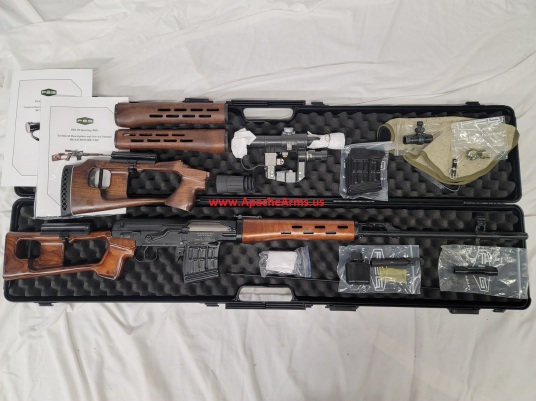 The first modern SVD rifle brought into the country in almost 30 years. Very limited number and likely will not happen again. 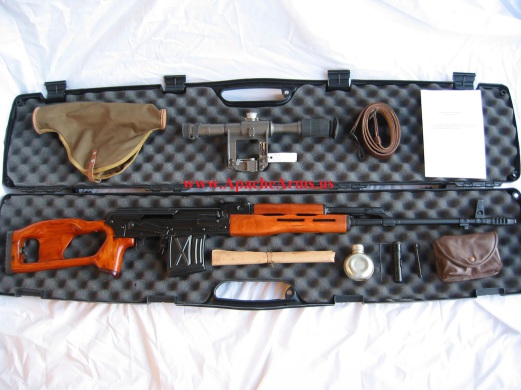 This is a factory built Romanian Dragunov sniper rifle, complete with original military scope(not the imported version) and all of the accessories pictured. These rifles, also known as a Romak-3, SSG-97, and PSL, are extremely accurate and reliable. The Dragunov design has been in use since the mid 60's, and is still the official design of Russia and other Com-bloc countries. This is the Romanian version, which improved on the Russian design as far as reliability goes. This is a great weapon for several reasons.

First, it uses the same type of action that an AK-47 uses, which makes it drag-through-the-mud reliable. Second, it's semi-automatic, which means if you miss with the first shot, you have an immediate chance to make up for it. Third, it uses a very powerful 7.62x54R caliber bullet, which is a monster round. The large size of the round and the long barrel of the rifle combine to allow shooting out to 1000yds. A communist sniper issued a Dragunov rifle in the Afghan war stated that he felt confident hitting people out to 800 yds with one shot, and vehicles up to 1000 yds. These features make the perfect long-range weapon for any situation. This rifle comes complete with scope(very cool, built in range-finder reticle which was originally lit with radioactive Tritium), cleaning kit, broken-shell extractor, small spare parts, cleaning rod, oil bottle, leather sling, owner's manual provided by importer, and a hardcase. Quantities of these rifles are extremely limited.

The picture is representative, these all look the same. These are arsenal-stored rifles; not fired, but the wood will sometimes show some age. These rifles were never meant to be pretty, they were meant to shoot things from a long ways away. Also because these are rifles from military storage, some small parts like the some small accessories may vary from rifle to rifle (cleaning kit pouch, cleaning kit contents, etc.). This rifle is a valuable investment, a great collector's piece, and a very fun gun to shoot. This may be your last chance for a great rifle.

Prices and options below. Prices can vary significantly from ranges posted below based on rarity, condition, and current market prices.

Surplus Romanian PSL/FPK Dragunov receiver with scope rail in 7.62x54r. Will accept last round bolt hold open devices. Great for builds and FPK/PSL parts kits. Some have minor finish wear or scratches from storage ( similar to the pictures). Some look to have been partially assembled or fitted before TN Guns ceased production of rifles but have all been returned to their original, pictured configuration (if you look you can see where possibly a couple of rivets were installed or the safety lever was fitted). None appear to have ever been assembled into a complete rifle and none look to have any issues. Because the importer, TN Guns, is going out of business and will no longer be able to honor any warranty, these are sold as-is. These are the last of the original Romanian receivers in the country. Now is a good time to order a spare or set one aside for later.