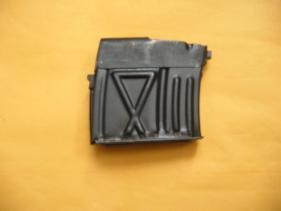 This is a 5-round magazine for the Romanian PSL/Dragunov. These were only imported with the very first of these rifles years ago and no more have come in. Very rare, but a must for hunting in some areas. If just looking to shoot, by all means go with the cheaper and more readily available 10-round mags, but if you need one of these for hunting in your area, here is your chance. I'm listing as used, but it looks to be new and probably is. 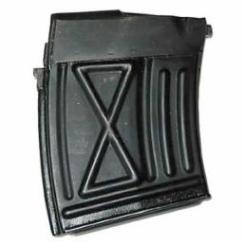 Surplus 10-round PSL magazine. Very good to excellent condition. Some may show minor signs of long-term storage and some rust.

*PSL mags are drying up fast. Once we get to a certain point, they will only be available with rifle purchases. 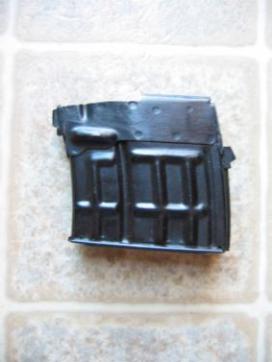 These are 7.62x54R mags for Russian SVD rifles, TIGR rifles, and the Chinese NDM-86 rifles. Some look to be converted 10-round magazines with weld marks, some look much cleaner. All are functional. Used condition, little to no finish wear. 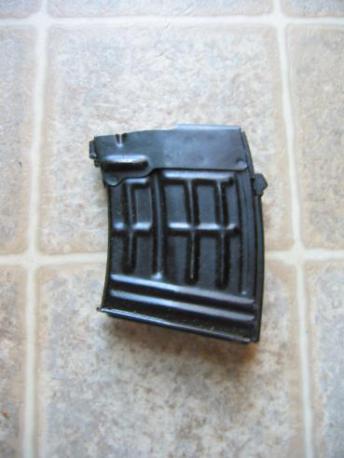 Full-capacity, 10-round 7.62x54R magazines for the Russian SVD, TIGR, and NDM rifles. Most of these show show some finish wear from use, some have arsenal numbers painted on them.

This is a Romanian sniper pack. The pack is in used surplus condition. These packs are what a sniper would be issued when going out into the field. The front half is divided into four pockets to hold spare magazines, while the back half is a large pocket big enough to hold a detached scope (if you're carrying a night vision scope along with your day-time scope), the cleaning kit, and small pockets for the cleaning rods and accessories. Very nice addition to your PSL or Dragunov rifle.

The picture is a stock photo and not the actual pack you'll receive. Condition varies, with some being like new and some worn fairly well, but all will do what they are supposed to. Don't miss out on these as stockpiles will run out. 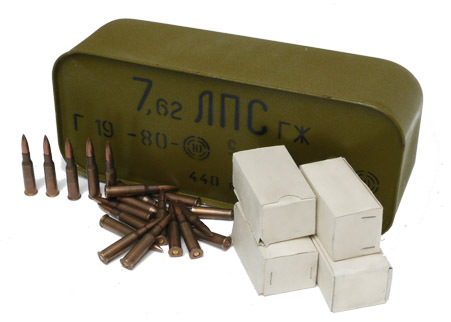 Often we are asked how easy is it to find ammunition for the PSL/Dragunov type rifles. Currently there is a good supply in the United States and it's definitely the most affordable out of all the large rifle calibers out there. We're now offering stanadard Russian made military ammunition in vacuum sealed metal tins, just as shipped to Russian troops. It's 147 gr light ball ammo, so it's safe to use in all Dragunov type rifles. Each tin contains 440 rounds, packed into 20 round paper bundles.

The ammunition is mildly corrosive, just as all Russian/Eastern European ammo is, in order to give it a longer shelf life and higher reliability. It is not a problem if you give your rifle a quick cleaning after you shoot it. The tins are either Russian or Bulgarian manufacture, and most is dated in the 1980's. Order now and stock up before these cheap bullets run out. Shipping is calculated on zip code, but is normally between $30 and $35. We should be able to fill 95% of ammo orders within one week, but please allow up to 3 weeks for delivery. 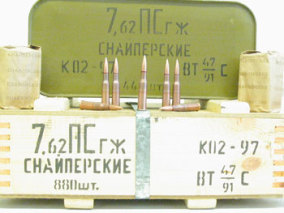 These are un-opened tins of Russian 7n1 sniper ammunition. With the development of the Dragunov sniper rifle, the Russians felt the need for something more accurate than mass-produced machine gun ammo. Their answer was the 7n1 round. This ammunition is match grade and produced in extremely limited quantities for military use only. It is the most accurate ammunition available for your PSL/Dragunov rifle. Not only was the round designed for hair-splitting accuracy, but it was also developed with a steel core and a hollow spot in the nose of the bullet with a lead knocker behind it. This means that upon impact into a person, that knocker moves forward into the hollow spot, destabilizing the bullet and causing it to tumble into the target creating massive injury. Very deadly stuff. It comes packaged in bundles of 20 marked with the Russian word for "sniper".

The packaging is removed before going into combat so that if captured you cannot be identified as a sniper, who is the most hated person on a battlefield. Scarce even in the Russian army (according to the account of a sniper in the Afghan war), this ammunition is not exported by Russia, and is not normally sold to civilians. This stuff is a must have for someone collecting the Dragunov or PSL rifles, as it was created just for them, or shoot it to get the most accuracy out of your Dragunov. Price is for one tin, each tin is 440 rounds. Very limited supply, and once all of this stuff falls into the hands of collectors and shooters, there will be no more.

No ammunition will shipped to prohibited areas such as Napa, Ventura, and Yolo counties in California or the cities of Los Angeles, Oakland and San Francisco. No Shipments to Massachusetts, New York City or Washinton D.C. No Shipments to Chicago, IL. We cannot ship to Hawaii. No shipments to the City of Annapolis or Montgomery County in Maryland. 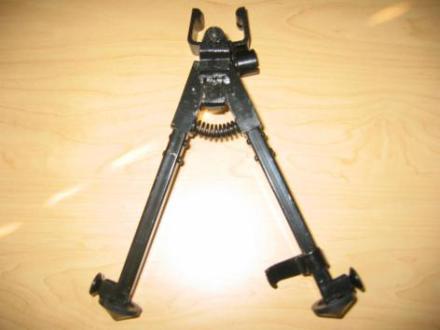 This is a bipod for the Russian and Chinese Dragunov. These can be very difficult to find due to import restrictions. Will fit the original Russian SVD, the TIGER, and the Chinese NDM rifles, it will not fit the Romanian version. Clamps on to the receiver in order to maximize accuracy. 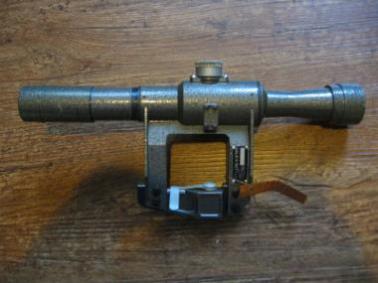 The standard scope for the Romanian military, the TIP2 is an extremely durable and rugged scope that also maintains excellent clarity. These scopes are on par with the Russian originals. The Romanians did away with the battery compartments, making it more rugged, and replaced the lit reticle with tritium.

Unfortunately the tritium is no longer active in these, but they remain great scope at a low price. We are picturing these without the rubber lens covers, but most of these have the covers attached. To ensure a cover, add an additional $5. For the extremely low price we're offering these at, you can afford to stock up with a couple of spares.

The standard scope for the Romanian military is a 4 power optic. This is an excellent scope for combat, but for target shooting or eyes that aren't what they used to be, a 6 or 8 power scope can make shooting the Dragunov rifles much more enjoyable. Soviet or European night vision scopes with mounts for the Dragunov rifles are also available. Prices vary on these special order scopes, send an email with the type of scope you're interested in and we'll get you an estimate. Night vision scopes can be had for as low as $500. 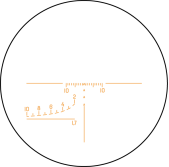